10 Tips to Clear Any Blocked Drain 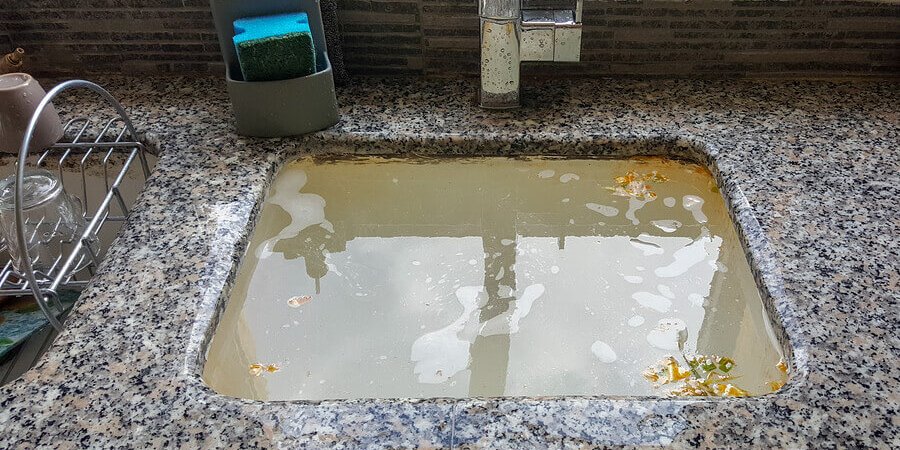 Of all the reasons to call on a plumber, a blocked drain is one of the most common. From foul smells to water that simply won’t drain, blocked sinks are the root cause of all kinds of minor problems. When these issues are allowed to get worse, however, life can quickly become pretty nightmarish.

If you suspect you have a blocked drain, the good news is you may be able to clear it yourself. With our advice, everything will be flowing smoothly in no time.

Signs of a blocked drain

Blocked drains can be a source of property damage and health problems for people and pets. The early warning signs of a blocked drain are:

The first sign you may notice is an unusual smell. In most cases, this is a sewage-like scent, and you might wander into your bathroom and wonder if someone forgot to flush. Other signs of a blocked drain include:

You’re probably quite used to everything flowing down your drain. As a result, it’s quite alarming seeing water spill back up. If your drain is overflowing, that means you’re facing a blockage.

Gurgling sounds indicate that the water is pooling and pushing against the pipe. If you experience this, it’s often the case that a blockage is a problem.

When emptying your sink or taking a shower, you might notice that the water pools for longer than expected. Usually, the problem worsens rather than getting better by itself, which suggests that the blockage is growing larger. 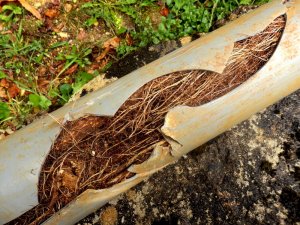 Causes of a blocked drain

Although most people use their drains appropriately, it’s quite easy to make mistakes. Occasionally, everyday use results in blocked drains too. Common causes include:

Tree roots won’t be the cause of local drain blockages, but they can disrupt your main sewage system. The root keeps growing until it breaches the pipe and causes a blockage.

Although toiletries are essential, some can cause drain blockages. For example, nappies, baby wipes and sanitary products should not be flushed down the toilet.

When you have kids, there’s always a risk they’ll flush something unusual down the toilet. Toys and other foreign objects become lodged in the u-bend, resulting in a blockage.

In no circumstances should you throw cooking oil into the sink, as it’s too viscous to flow freely. Instead, it gathers and clumps together with food debris to cause a blockage.

Much like cooking oil, food scraps don’t belong in your drainage system. This is especially true of coffee grounds.

When minerals such as calcium build up in your pipes, this causes constriction. Although this may not cause a blockage on its own, it does make it easier for other types of blockages to form.

Although liquid soap may not cause drain blockages, solid soap bars can get lodged within pipes until they eventually break down. One way to stop this from happening is to use a mesh wire guard to cover plug holes.

Having long hair is both a blessing and a curse. When you wash it in the bath or shower, you’ll find that some of it drops out. As it does, it mixes in with other substances and becomes a major cause of a blocked drain.

Natural debris can fall into your outdoor drains, especially when you don’t use gutter guards. This usually means leaves and twigs, although it can include dirt and grit too.

When cat litter is exposed to water it clumps together and then expands. As a result, any cat litter that enters your drain is likely to cause a blockage. 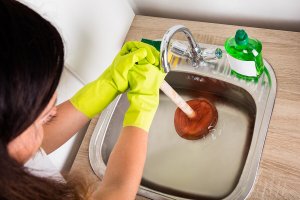 How to clear a blocked drain

How you clear your blocked drain will depend on what caused the blockage in the first place. There are plenty of home remedies to choose from. You may find that you need to try them all out before calling on a plumber.

Boiling water is useful for tackling blocked drains caused by grease, conditioner, and some other kinds of toiletries. This is because these substances have a low melting point, and the extreme heat helps to break them up. Boil a kettle with water and pour it down the drain to shift the blockage.

You can use some natural cleaners to create a fizzing effect that breaks drain blockages apart. Try pouring hot water down the drain, then follow it with one cup of bicarbonate of soda and a cup of vinegar. Leave it for ten minutes, then chase it with more hot water. A combination of the hot water and the natural cleaner mixture can break blockages up.

Some stores sell caustic cleaners that take stronger action against drain blockages. It dissolves grease, fat, and oils, making it ideal for tougher blockages. Always follow the instructions on the packaging and ventilate the room before starting.

As a simple yet effective tool, plungers can help to dislodge local blockages. They work by forming a seal around the plug hole, followed by a vacuum effect that removes the blockage.

You can make a DIY drain snake out of any thin metal wire, such as a coat hanger. Leave a hook at the end of the snake and insert it into the plughole. Try using it to fish out local blockages made of hair. This approach is most effective in showers.

Plumbers drain snakes are advanced tools that only a professional should use. They delve further into your pipes and can remove blockages from deep within the system. We usually reserve these tools for difficult clogs that everyday methods can’t tackle.

When snaking isn’t doing the trick, we can use CCTV to identify where the clog is and how extensive it is. This usually involves inserting a camera along with a tool that’s similar to a drain snake. We then assess the severity of the clog and form a plan for removing it.

Hydro jets use intense and sharp bursts of water to remove debris and other substances from pipes. Sometimes we need to follow this approach using other drain blockage removal techniques, but it’s a dependable way to remove the bulk of the problem.

In the case of severe drain blockages, excavation is necessary. This involves digging around the drain so that we can repair or replace some of the pipework. Although this type of approach isn’t always necessary, it can save the rest of your pipework from extensive damage.

When your pipes are damaged because of a prolonged blockage, pipe relining is an efficient and effective alternative to full pipe replacement. We use flexible tools and resin to reline the pipe after we’ve removed the offending blockage.

Blocked drains happen for lots of reasons. While some are obvious, others you may not even think of. When you notice tell-tale signs such as gurgling noises, slow draining, and foul smells, try using some of the home remedies we’ve suggested. If they don’t work, it’s time to call on a plumber.

Precise Plumbing, we’re your blocked drain experts in Adelaide. We understand that dealing with a blocked drain can make life pretty uncomfortable. Fortunately, you don’t have to suffer alone. Call us to unblock your drain today.