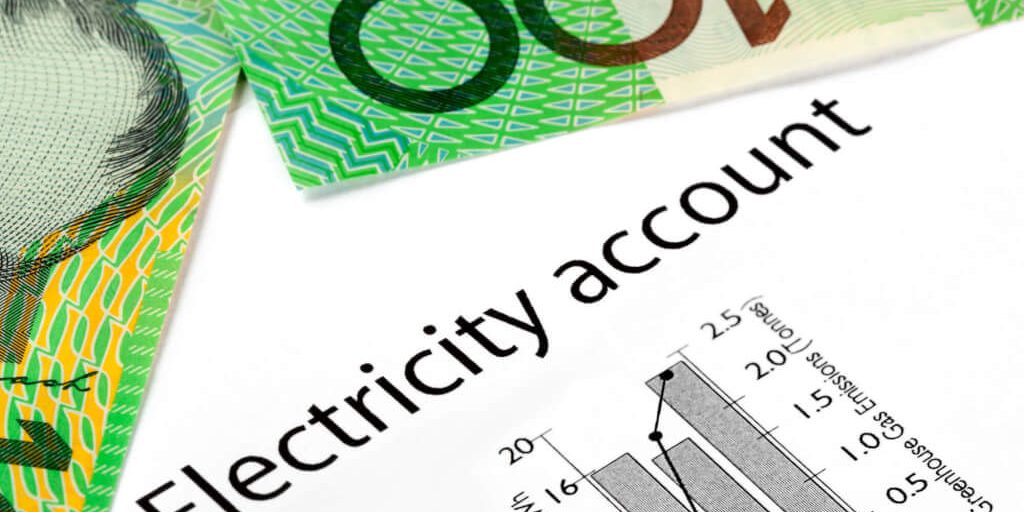 In Adelaide, we already pay more for power because South Australia has the highest usage rate in Australia. Add to this the costs associated with an overly complex, highly regulated and predominantly fossil-fueled industry, it’s little wonder you’re paying more than you need to for power. However, recent data on the average cost of electricity in South Australia provides – at least – a starting point for you to set to work saving energy in your home and reducing the financial and environmental costs of energy waste.

The Australian Energy Regulator (AER) publishes information on the average price of power throughout Australia. For South Australia, the reference figure of $1,832 is based on the cost for a residential customer who consumes 4,000 kWh / year on a single rate tariff in the ‘SA Power Network’ network. This serves as a useful comparison point because with multiple retailers you could be paying anywhere from as low as ~ $1400 upwards of $2000 for the same electricity consumption here in Adelaide.

Earlier this year (2020) Canstar Blue applied customer satisfaction data to calculate the average cost of power showing that in South Australia, the average power bill is around $1,759 per annum. National level findings suggest that higher-income correlates to higher spending on electricity, which could be accounted for as lifestyle factors, while bill-payers aged 70+ have the lowest annual bills at $1,623 and those at the opposite end of the age scale (aged 18-29) the highest annual bills at $1,973. Data also supports the logic that the more people in a household the cheaper it becomes per person.

More specific to Adelaide, data from the 2016 Census shows that the median household size in Greater Adelaide is only two people with the Energy Made Easy benchmark suggesting that the average Adelaide power consumption – based on two people in Postcode 5000 – is then 4514kWh per year. Using the Canstar Blue electricity comparison tools for the year 1 September 2019 to 31 August 2020 provides pricing plan options from as low as $1455 – based on the close estimated consumption of 4,503 kWh / year on a single rate tariff. The caveat on this that this is an estimate only and that your bill will differ, based on your actual usage. The important takeaway is that if you live in Adelaide and are paying around the average South Australian price of $1759 per year for power, you’re paying more for power than you could be.

The vast majority of South Australian homes are dependent on electricity, everything from charging devices, making toast or grabbing ice from the freezer adds to the cost of your energy bill. Power rates are the actual price that you pay for your energy and they are normally split into two different types.

Usage charges make up a significant proportion of your electricity bill and are subject to market pricing. At the time of writing (1200 Tuesday 8 September 2020 ACST) the market rate for South Australia was $45.44 per kWh. Note however that the price you pay is determined by the contract you hold with your electricity retailer.

Climate Council science (2018) on the cost of energy advises that the average Australian household electricity bill is made up of four main cost components:

We discuss the first three of these four categories below, as they account for the bulk of your power bill. Wholesale, network and retails costs include multiple tiers of fees and variable costs which make up the complex web upon which our electricity is priced. 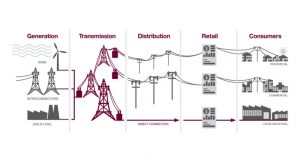 First up is the cost of generating electricity from power plants. In South Australia, this includes power generated from both renewable (solar and wind) and non-renewable sources (natural gas, diesel, landfill gas).
The generated electricity is sold through the National Electricity Market (NEM) to electricity retailers, who then sell it to households and businesses. Several intermediaries after being generated, it arrives at your home, at a price subject to change. From the very outset, the industry is subject to multiple levels of legislative and regulatory oversight, which of course adds to the cost of securing our nation’s (mostly) reliable, consistent energy supply.

South Australia currently hosts 35% of the nation’s installed wind capacity and was the first jurisdiction to introduce rooftop solar feed-in legislation in Australia so, in terms of wholesale costs, consumers can make informed choices about which power generation sources we support when selecting an electricity retailer. Although decreasing, the bulk of our power remains fossil-fuelled yet we are progressing towards more renewable energy sources including hydro, wave and geothermal opportunities.

At the distribution substations, voltage is reduced further to 11,000 volts. This electricity is distributed along wires to ground level transformer stations, street pole transformers and pad mount transformers, which reduce the voltage a third time, to supply electricity to homes and businesses. In South Australia, the powerlines, distribution stations and most household electricity meters are owned and operated by SA Power Network who declare their distribution charges to be “about $12 per week for the average customer” or $624 per annum, accounting for “less than a third of the total bill for a typical residential customer” . Revenue is used to fund the maintenance of an extensive distribution network delivering electricity across the State via more than 400 substations, 645,000 power poles and 90,000 km of powerlines. 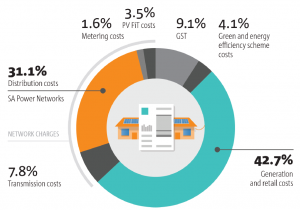 Retailers pay regulated charges to the transmission and distribution companies to transport the electricity, costs which are passed on to consumers. As with any business the retail costs also account for expenses incurred by electricity retailers to operate plus a margin for revenue. If you have been with the same energy provider for years, then it’s time to shop around for a better deal because even if you had a great deal when you signed up, energy companies regularly adjust prices down (to build market share) without advising or applying the cost-saving to existing customer accounts.

When investigating your options, one of the keys to saving on electricity retail costs is to avoid lock-in contracts so that you can negotiate on pricing with your existing retailer or switch between retailers as lower price options become available. Be warned, price-based marketing promotions often target people for long -term contracts, using tiered pricing structures to make the 12-month (or more) contract appear more cost-effective in the long term.

However, energy prices have more than halved in the past year (comparing SA Q2 2019 to Q2 2020) and while there are no guarantees for consumers that they will not significantly increase again if you are on a long-term contract of 12 months or more then you may well have spent several hundred dollars more than you would have on a flexible-term contract.

The National Energy Retail Law commenced in South Australia on 1 February 2013, setting out your rights and responsibilities as an electricity consumer. There are laws to protect energy customers which require that retailers must provide a printed summary of any contract which must include the following:

Before agreeing to any contract, read the terms and conditions and remember that even after agreeing to the terms of the energy retailers contract you have the legal right to change your mind within 10 business days, without penalty.

For more ways to save on your future power bills talk to the electrical team at Precise Services. Our licensed, qualified, and professional electricians are available business hours Monday to Friday and 24/7 for emergency electrical work. Give us a call next time you need an electrician for repairs, testing or simply some honest advice.